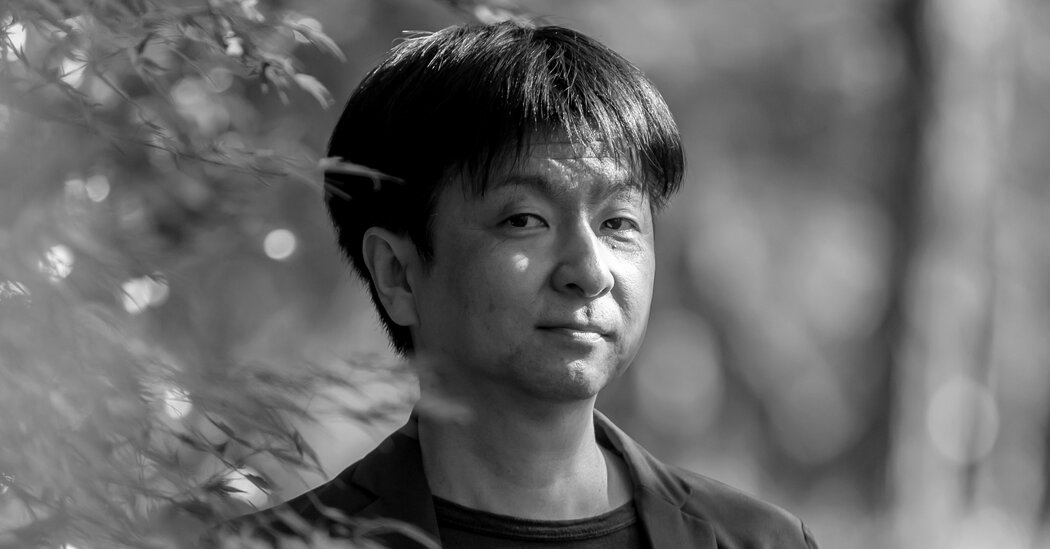 SENDAI, Japan — Kotaro Isaka, one of Japan’s most popular crime thriller writers, is a self-described homebody. He rarely leaves Sendai, the city in northeast Japan where he lives, and many of his books are set there.

Yet when his 2010 novel “Maria Beetle” was adapted into “Bullet Train,” a Hollywood action film starring Brad Pitt, Brian Tyree Henry and Joey King that opens in the United States on Aug. 5, he embraced the largely Western cast and highly stylized, hyper-neon setting that can perhaps best be described as Japan-adjacent.

In writing “Maria Beetle,” a thriller about multiple assassins trapped on the same high-speed train, Isaka created a motley crew of characters who are “not real people, and maybe they’re not even Japanese,” Isaka, 51, said during a recent interview in the lounge of a hotel restaurant not far from his home and just steps from the local shinkansen — or bullet train — station. The novel, which was originally published in Japan, debuted in English last year.

With its fast-paced plot, colorful assassins, high body count, sadistic teenage villain and cheeky humor, Isaka always dreamed the novel might make an ideal Hollywood movie. Its original Japanese context, he said, did not matter much.

“I don’t have any feeling of wanting people to understand Japanese literature or culture,” Isaka said. “It’s not like I understand that much about Japan, either.”

Turning Isaka’s novel into an American-style action movie with a mixed cast from the United States, Britain and Japan was part creative license, part business decision. Despite the popularity of manga graphic novels and anime cartoons outside Japan, few live-action movies or television shows with all-Japanese casts have become international hits in recent years. Unlike global phenomena from South Korea like “Squid Game” and “Parasite,” Japan has enjoyed art-house acclaim for films like the recent Oscar winner “Drive My Car” and the Cannes Palme d’Or-anointed “Shoplifters,” but rarely international box office success.

There have already been complaints in the Asian American media about whitewashing, though the cast of “Bullet Train” includes Black, Latino and Japanese actors. David Inoue, the executive director of the Japanese American Citizens League, told AsAmNews that “this movie seeks to affirm the belief that Asian actors in the leading roles cannot carry a blockbuster, despite all the recent evidence indicating otherwise, beginning with ‘Crazy Rich Asians’ and extending to ‘Shang-Chi.’”

That Isaka himself regarded his characters as ethnically malleable “gave us comfort in honoring its Japanese soul but at the same time giving the movie a chance to get big giant movie stars and have it work on a global scale,” said Sanford Panitch, a president of Sony Pictures Entertainment Motion Picture Group, the studio behind “Bullet Train.”

For anyone who has lived through the strict pandemic border closures in Japan, the presence of so many non-Japanese people on a train supposedly traveling from Tokyo to Kyoto is jarring, and makes clear the movie bears little resemblance to real life.

David Leitch, the director of “Bullet Train,” and its screenwriter, Zak Olkewicz, said they wanted to preserve some of the novel’s most important characters — three generations of one Japanese family. “People who haven’t necessarily seen the movie will be surprised to find out that the plot pretty much kind of is about the Japanese characters and their story lines getting that resolution,” Olkewicz said, though the characters aren’t at the center of the film.

Yet even in Isaka’s novel there are Western references: One of the assassins is obsessed with Thomas the Tank Engine, a detail that is preserved in the movie.

“We were all really aware and wanted to make it super inclusive and international,” said Leitch, who directed “Deadpool 2” and “Atomic Blonde” and served as an executive producer on two “John Wick” movies. The diversity of the cast, he said, “just shows you the strength of the original author’s work and how this could be a story that could transcend race anyway.”

At one point the filmmakers considered changing the setting. “We had conversations like ‘maybe it could be Europe, maybe it could be a different part of Asia,’” Leitch said. “Where could we see all these international types colliding?”

In the end, he decided, “Tokyo is as international of a city as anywhere.” (With key plot points hinging on the train arriving on time at various stops along the route, Isaka said, “we can only think of a Japanese bullet train.”)

Leitch had hoped to shoot parts of the film in Japan, but the pandemic made that impossible, so he leaned further into a fantastical vision created on an American sound stage. Seeing it, Isaka said he was grateful to have the story’s extreme violence removed from any kind of realistic setting. “I am relieved that it’s set in Japan’s future or like a Gotham City,” he said. “It’s a world that people don’t know.”

In Japan, Isaka has published more than 40 novels — many of them best sellers — and his agents hope the high profile of “Bullet Train” will help elevate his work among English-language readers who already have an affinity for Japanese entertainment through manga, anime or Haruki Murakami, the Japanese novelist who is a literary star in the West.

The son of art gallery owners in Chiba, south of Tokyo, Isaka grew up reading mysteries and thrillers, including translations of novels by Agatha Christie and Ellery Queen. He moved to Sendai to study law at Tohoku University, where he began writing short stories.

After graduation, he took a job as a systems engineer but woke up before 5 a.m. most mornings to write fiction. Because the apartment he shared with his wife was too small for a separate writing space, he would sometimes retreat with his laptop to a stone bench along the river near his apartment, tapping out stories in the evenings after work.

In 2000, his first novel, “Audubon’s Prayer,” which features a talking scarecrow, a cat who can predict the weather and a childhood bully-turned-policeman, won the Shincho Mystery Club Prize for newcomers.

Two years later, with his wife’s encouragement, he cut the cord to a monthly paycheck. “I thought if I don’t quit my job and focus,” he said, “I cannot write something great.”

Several of his novels have been adapted into Japanese movies, though none of them have been released in the United States. His works in translation are popular in China and South Korea.

Even before his novels were translated into English, Japanese critics detected an American — or at least Hollywood — sensibility in his work.

The way characters speak in some of his novels is “almost as if he is copying American movie-style dialogue in Japanese,” said Atsushi Sasaki, a book critic. “When you watch the dubbed version of Hollywood movies, the Japanese can sound very unnatural, and that’s how I always imagined his books and what his characters were saying.”

With Isaka’s work all but unknown to English-language readers, Yuma Terada and Ryosuke Saegusa, the founders of CTB, a film, production and literary agency that represents Isaka, consolidated the copyrights to his novels and commissioned translations of a handful of them, hoping to pitch him as a literary cousin to Murakami.

Sam Malissa, who translated “Maria Beetle,” along with another novel, “Three Assassins,” which is part of a loose trilogy and has also been published in English in Britain and the United States, said the madcap energy of Isaka’s work might help push the boundaries of Western stereotypes about Japanese literature. Too often, he said, English-reading audiences conceive of Japanese fiction as akin to Ukiyo-e woodblock painting with a “koan-like inscrutability,” Malissa said.

Terada, a former financier, and Saegusa, a longtime editor at Kodansha, one of Japan’s largest publishing houses that has issued several Isaka novels, began shopping Malissa’s manuscript of “Bullet Train” to several studios but initially found no takers. After Terada and Saegusa boiled down the plot to a five-page summary, three studios bid, and Sony ultimately won. (Terada and Saegusa are executive producers on the film.)

Shortly after “Maria Beetle” was optioned for the film, the translated novel sold to Harvill Secker, a London-based unit of Penguin Books.

Liz Foley, the publishing director, read the manuscript on a beach holiday. “Suddenly I was transported into this world that felt slightly off-kilter,” she said. Although the book had been optioned by Sony at that point, neither Leitch nor Pitt had yet been attached to the project.

So far, Foley said, the English edition of “Bullet Train” — which was retitled from the original — has not been a best seller but has had “really good sales.”

The American publisher Overlook Press, a unit of Abrams Books, released it last August in the United States, where it was welcomed with positive reviews. On NPR’s “Fresh Air,” the critic John Powers described “Bullet Train” as “the irresponsible pleasure of sheer entertainment.” Both publishers are issuing film tie-in editions in the hopes of capturing some movie afterglow.

Foreign literature is a notoriously difficult market in English. But Philip Gabriel, Murakami’s longtime translator who has translated three novels by Isaka, hopes the film adaptation of “Bullet Train” will pique the interest of other English-language publishers. “The name recognition will at the very least get publishers to say, ‘Hey, let’s look again at these other Isaka novels,’” Gabriel said.

Outside of English-language markets, Isaka’s work is getting more screen treatment: His novel “The Fool of the End” is scheduled to be made into a Korean drama series for Netflix.

Isaka said that just as his work is leaping onto the global stage, he can no longer reliably make the six-page daily writing target he set for himself when he was starting out as a novelist.

“I have already written a lot of what I am meant to write,” he lamented.

He said his wife, who two decades ago gave him permission to quit his job to write full time, recently told him to focus on producing one good novel in his 50s.

“I feel lighter now,” he said.