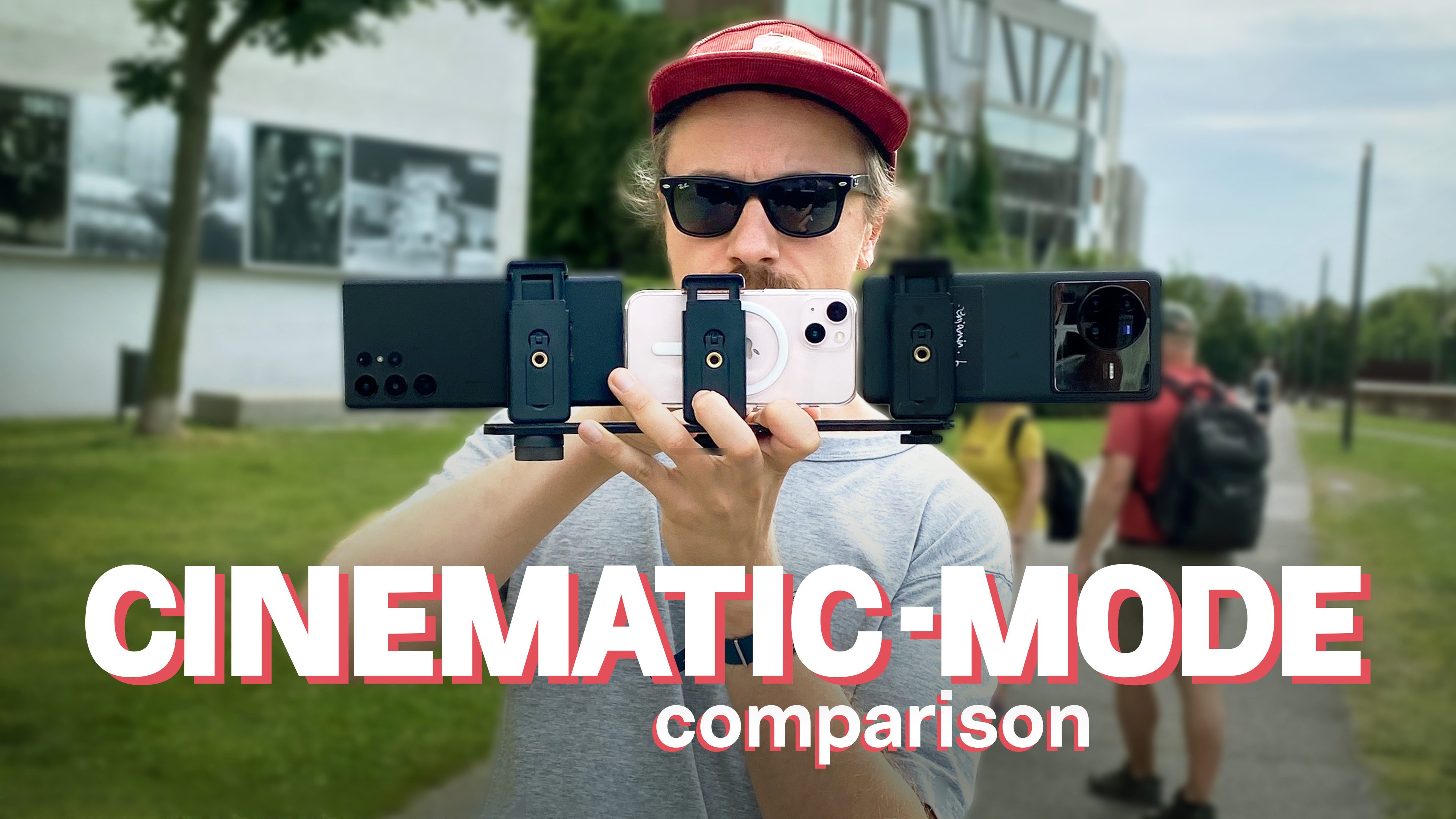 With digital video bokeh, more and more manufacturers are integrating a really exciting feature into their camera smartphones. The smartphones recognize what you want to show in the foreground, just like the portrait mode for photos. The background is blurred, which provides photos with a professional look. I was really blown away by the quality of Apple’s Cinematic mode in the iPhone 13 mini review in February!

Vivo, on the other hand, wowed me with the simulation of its Zeiss lenses in its new flagship during the unveiling of the X80 Pro, and Samsung also offers a way to blur the background in videos with its portrait videos. Since the Galaxy S22 Ultra performed really well in the review, I grabbed the flagship device for this comparison, so I want to find out: Who simulates the professional cinema look best? And who is able to transform it into the best and most useful feature?

What is bokeh and what do you want with it?

The word “bokeh” comes from the Japanese language and means something like “out of focus, blurred” – and that’s exactly what it’s all about. Bokeh describes the natural background blur of a lens. This occurs primarily in lenses with a large open aperture in combination with large camera sensors. Since camera smartphones still generally use very small sensors, the natural background blur is barely noticeable in most subjects. We go into more detail about this in our guide to aperture specifications in smartphones.

How well does this work? This is exactly what I want to find out in this comparison! In order to do so, I compared the iPhone 13 mini, which originally convinced me of the concept of digital video bokeh, with the Vivo X80 Pro and Samsung’s Galaxy S22 Ultra. Vivo has brought in Zeiss for its new flagship and simulated the bokeh of various Zeiss lenses. Samsung offers the feature more as a side note and does surprisingly little advertising for its portrait videos.

How we tested the digital bokeh

Before we begin the comparison, we need to set a few ground rules. This comparison is about the best simulation of true depth of field. Since this is also where the wheat is separated from the chaff, we paid extra attention to the following characteristics in our digital candidates:

Availability of the digital bokeh

Apple offers a Cinematic Mode in its iPhone 13 series. Here, the smartphones simulate a blurred background regardless of the subject. You can change the aperture and select which subject you want to focus on by tapping on that area on the screen. What works for Apple? The manufacturer saves the different focus levels in the video so that you can change the focus later on. The Cinematic Mode works only with 1,080p at 30 frames per second as well as in the wide-angle mode and the selfie camera.

Samsung blurs the background in its portrait video. Unlike Apple, Samsung needs a face or at least an outline that resembles a person for this. You can adjust the blur in seven levels and set a different bokeh with “Large circles”. There are also further stylizations with Colorkey and a mode that redraws the background using red and blue lines. Samsung’s digital bokeh mode also offers a resolution of 1,080p in 30 frames per second, but you can also opt to select the 3x telephoto lens.

Vivo lets you tap a diamond in video mode and switch to “Cinematic” mode using the Zeiss logo. The resolution drops to 1,080p like in Apple and Samsung, but you only get 24 frames per second in each recording. The blur strength can be adjusted up to 100 levels and you can activate a 2x zoom. Another special feature of the X80 Pro: the smartphone automatically films in the ultra-wide 21:9 format.

Reliability of the foreground mask

It is particularly difficult to digitally separate the foreground from the background in videos. After all, the mask has to change as instantaneously as possible when people move in front of the camera or you pan your smartphone. To compare the mask, I pulled a few screenshots from our comparison video.

When it comes to masking, all three smartphones do a similarly good job. My colleague Camila Rinaldi is sharp all the way to the tips of her hair, where there is a sharp edge towards the blurred background. A lens with optical bokeh would not have done that differently. However, the three-dimensionality of the mask can be criticized in all three devices. Of course, Camila is not a two-dimensional plate, but a human being with rough edges.

This means that the sharpness should slowly drop from the left side of her head to her sunglasses. The smartphones failed to do that and let the right side of her sunglasses fall off sharply. Fine hairs are also quickly blurred, which can be seen in the following screenshot:

In the video, we see most artifacts in the Vivo X80 Pro when subjects move or the smartphone moves. If a subject is in the picture, Samsung is the most reliable performer here, but the iPhone can also apply the blurring to non-human subjects and provide a run for Samsung’s money. This is best demonstrated right at the beginning with the flowers in the office.

Quality of blur in the background

Camera reviews tend to always concentrate on the lens itself and what makes a nice bokeh. For this test, however, we mainly want it to look realistic and natural. Let’s begin with an example yet again:

For this shot, I cranked the blur all the way up on all three smartphones. Here, the iPhone produces the best result in my opinion. Samsung’s background looks very artificial, while the Vivo especially screws up when it comes to people’s pockets and the backpack in the background. Apple’s algorithms for blurring produce an even result that could also come from its lens.

In the photo with the Buddha head, Apple was the most reliable performer in sharpening the background. The effect is barely noticeable on the other two smartphones, despite the fact that the Galaxy S22 Ultra didn’t even have anyone noticeable in the background.

The handling of the cinema modes is quite similar in the three smartphones, once you have discovered the modes. Apple clearly included the Cinematic Mode in the most noticeable place in the camera app. Samsung tucked it away in the “More” tab, and Vivo requires you to guess that the diamond in the video mode will activate the desired result.

The smartphones then automatically search for subjects that you want to focus on in the foreground. While Apple follows reality with the display of digital aperture steps, Samsung and Vivo opted for sliders with multiple steps: all three options work equally well.

As already mentioned, Apple has the special feature of being able to change the focus later on. Thus, the advantage lies with Apple since you can also adjust the sharpness levels on the big screen. Furthermore, models of the iPhone 13 series intelligently recognize which person in front of the camera who deserves the viewer’s attention at the moment.

The function is somewhat illustrated in the screenshot above. Looking towards Camila, I slowly blurred out as her face came into focus. However, you can see the effect a bit more in our video introducing Cinematic Mode. The other smartphones keep both of us in focus.

So what can we conclude at the end of this video bokeh comparison? Yes, compared to the Galaxy S22 Ultra and the Vivo X80 Pro, the iPhone 13 mini offers a significantly worse video quality, but that is not the point of this article. The iPhone 13 mini model is also much cheaper with a recommended retail price of $699, using smaller sensors and slower lenses.

However, these technical drawbacks do not make a big difference when Cinematic Mode comes into play. Based on our results, Apple obviously put the most engineering work into its Cinematic Mode. This is because it produced the most natural results and offers more sophisticated features with the ability to subsequently edit the focus planes and automatic focus detection.

However, the two Android models show that you by no means you have to buy an iPhone in order to enjoy the best cinema mode. This is a pleasing development, since Apple’s smartphones were considered the ultimate for portable video recorders for the longest time. The Vivo X80 Pro switches directly to the ultra-wide screen format for a direct cinema look when recording, a low-hanging fruit that unfortunately cannot be deactivated either.

Compared to the Galaxy S22 Ultra, however, the Vivo X80 Pro can separate non-human subjects from the background. It is thus a bit more suitable for cinematic shots. As soon as a face is in the picture, Samsung also does a good job of blurring the background and masking.

For me, the iPhone wins in this comparison because it offers the best thought-out concept for videos with blurred backgrounds. But what’s your favorite? Let me know in the comments and participate in my poll!