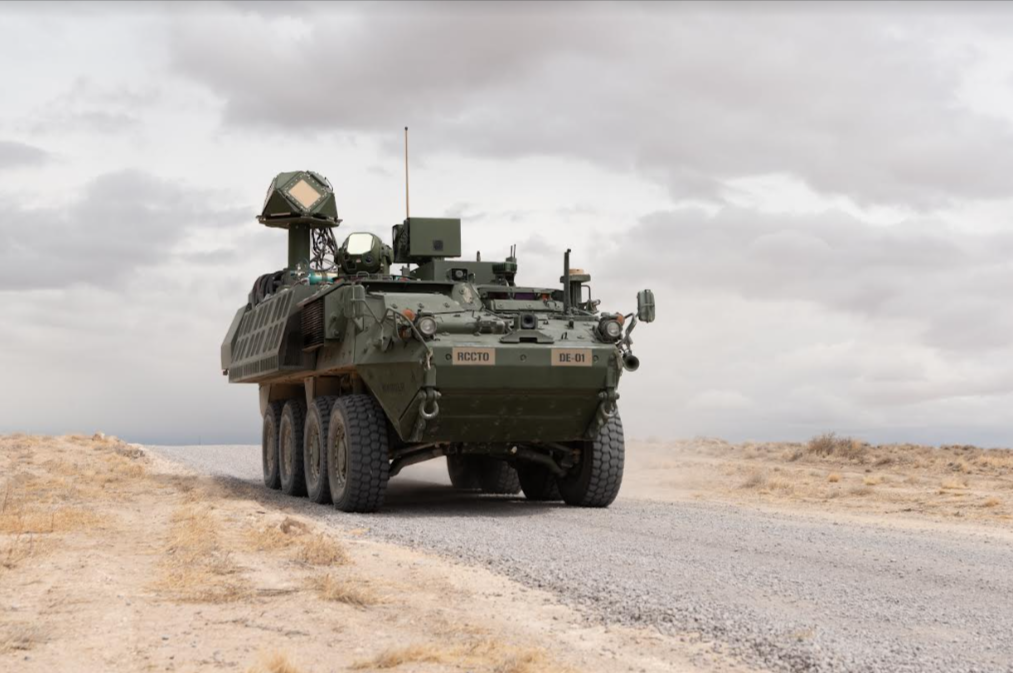 A 50 kilowatt-class laser mounted on a U.S. Army Stryker vehicle, shown during a live-fire exercise at White Sands Missile Range in New Mexico. The combat-capable weapon system is on track for operational fielding in 2022. Photo courtesy of U.S. Army.

In this Q&A with Justin Martin, engineering director and chief engineer for high-energy laser weapon systems at Raytheon Intelligence & Space, we discuss: how the company has tackled the challenge of tactically packaging a high-energy laser (HEL) weapon; the latest news on the Army’s Directed Energy Maneuver-Short Range Air Defense (DE M-SHORAD) program; and how HEL is becoming an essential tool in a layered and tiered air-defense network.

Breaking Defense: HEL for military applications has been said to be a capability that was always just five years away. How has Raytheon made HEL a reality by solving the problem of SWaP, combat capability, ruggedization, and conveyance? 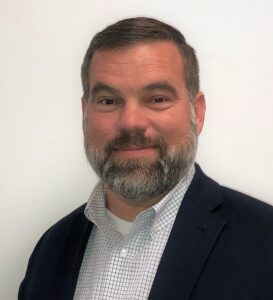 Martin: For decades, HEL was a major SWaP and logistical challenge. Laser sources were inefficient, which meant that you had to generate much more electric power than you were getting out of the laser. You needed large power and thermal management systems to deal with these inefficient laser sources. That’s not the barrier today as there’s been a lot of investment by commercial and defense industries in that area, as well as in the development of fiber lasers.

Today, one of the barriers is that it takes a lot of expertise and investment to tactically package a complex weapon system. Rather than focusing on that, many investments today have gone into what I call “science and technology demonstration systems” where you end up with lasers on 747s and on really big trucks because that’s more aligned with science and technology.

I’m an engineer. I love science and technology. But here at Raytheon, when it comes to HEL we’re not in science and technology anymore. We’re using solid-state fiber lasers, which are commercial laser modules, that are slightly modified and packaged into a weapon that’s cheaper, smaller, more reliable, and something that can be produced in any quantity as opposed to, again, being more of a lab instrument. Our HEL systems are real laser weapons on real platforms to be used by the Army and Air Force against real threats today.

Breaking Defense: How have you made these systems ruggedized and combat-capable for on-the-move applications?

Martin: One of the key elements of Raytheon’s design and packaging is that we don’t have a separate big box for each of the functions of the weapon system. We’ve done the work to package and integrate those functions into the right-size design and module for the work.

Case in point, the laser weapon must be an integrated system that prosecutes the entire kill chain from acquiring and tracking a target to controlling and directing the beam. That might be four boxes in an old S&T program.

For our high-energy lasers systems, we’ve leveraged something called the Multi-Spectral Targeting System, or MTS. It combines the EO/IR sensor, beam control, and beam director into a single integrated gimbal package. The system is built upon an MTS product family that has over four million operational hours across an array of host vehicles for surveillance and targeting.

We’ve addressed all of the requirements for a laser weapon in one small module, which leverages years of investment. It’s got an existing factory test and global field support infrastructure, and it’s one module that does that entire business end of the laser engagement. It provides a huge SWaP savings, is already rugged for real-world environments, and can be easily integrated and supported on different combat vehicles. 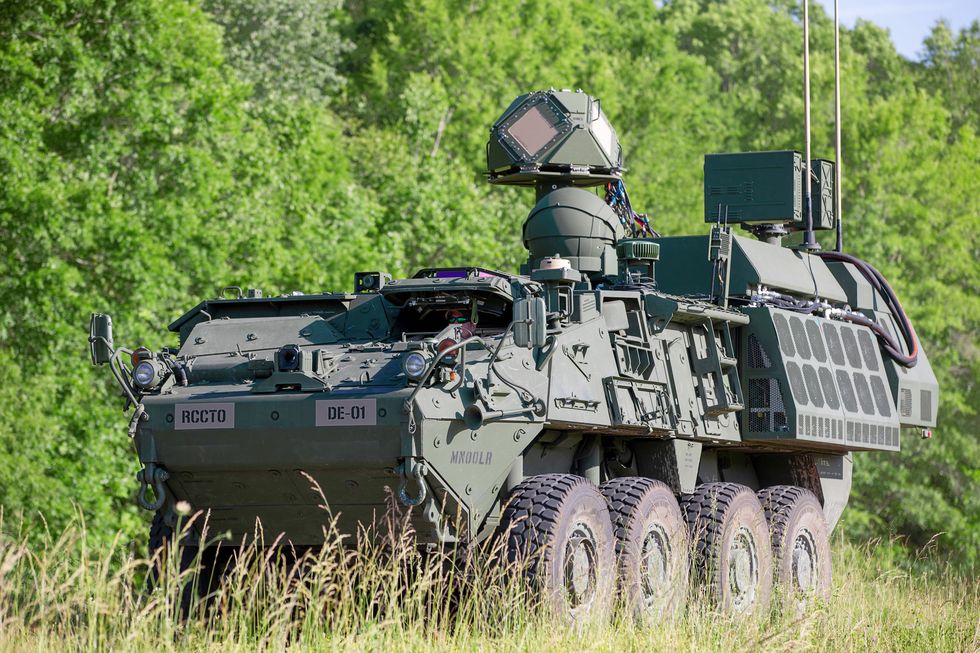 High-energy laser weapons do not replace traditional air defense systems, but are becoming an essential tool in a layered and tiered air-defense network.

Martin: This is an area where it’s not just about the design, it’s about the manufacturing techniques. We build these systems in our new 178,000-square-foot Advanced Integration and Manufacturing Center in McKinney, TX. Our advanced manufacturing techniques let us include efficient thermal systems in small packages. In our high-energy laser weapon system, we apply additive manufacturing to build efficient and effective thermal management heat exchangers in a small package. They support the thermal challenge of laser weapons that are built small and also installed inside tight spaces on combat vehicles.

Breaking Defense: What are the specific threats that Raytheon’s HEL programs are focused on, especially DE M-SHORAD?

Martin: The threats are very real, and the asymmetric threats serviced by high-energy lasers are drones or UAS, primarily those in the small-to-midsize Group 1, 2, and 3, along with rockets, artillery, and mortars.

When that threat set is listed out, it’s important to know that just building a nice laser doesn’t get the job done. You have to integrate a complete combat capability that’s achieved by accomplishing the entire kill chain from start to finish.

We’ve been talking mainly about the laser, but it’s equally important on these vehicles that we have a counter drone or counter RAM (rocket, artillery, mortar) radar for target detection, target acquisition, and cueing, as well as a command and control system that lets the operator engage with the laser weapon all the way through positive identification, aim-point, and then engage the target along with battle damage assessment. That target set demands a fully integrated combat capability with state-of-the-art radars, C2, and the laser.

Breaking Defense: What about systems like Iron Dome that are also designed to counter rockets and mortars? Does HEL replace something like Iron Dome?

A laser, though, is becoming an essential tool in a layered and tiered air-defense network. The threat set that I mentioned isn’t well serviced by those traditional air-defense systems. You need a laser to defend against them on the right side of the cost curve, with the effectiveness you need, and with the number of engagements that can support a rapid engagement base. You still need a standard air defense system to deal effectively with Group 4 and 5 aircraft, but the laser is there to deal with the threats that aren’t well-serviced by it.

Breaking Defense: Earlier you mentioned integrating the laser weapon into space-constrained vehicles. That’s what you did in the Army’s DE M-SHORAD program. Discuss how the laser can plug into existing systems and also the latest news related to DE M-SHORAD.

Martin: The end-to-end laser weapon that I’ve described — radar, C2, laser effector, and battle damage assessment — is a standalone system where all of those elements are integrated onto, in the case of DE M-SHORAD, a Stryker vehicle for on-the-move operations. The laser also has integrated and proven interfaces to connect to existing air defense command and control systems such as NASAMS (the National Advanced Surface to Air Missile System developed by Kongsberg Defence & Aerospace and Raytheon). There’s a large suite of C2 systems like NASAMS out there and our system has already been integrated with those higher-echelon C2 systems for air defense.

Regarding the program, our industry team delivered the first DE M-SHORAD Stryker and delivered it in the summer of 2021. It’s been used for quite a lot of soldier-operated, combat-realistic events at numerous locations, during which time soldiers have shot down a lot of drones and other threats.

Concurrent with those and very importantly, we’re building the full suite of the first four DE M-SHORAD Stryker vehicles. They’ll be delivered to the US Army’s DE M-SHORAD combat group at Fort Sill this fall. That’s a production and fielding base that high-energy lasers simply haven’t seen anywhere else. 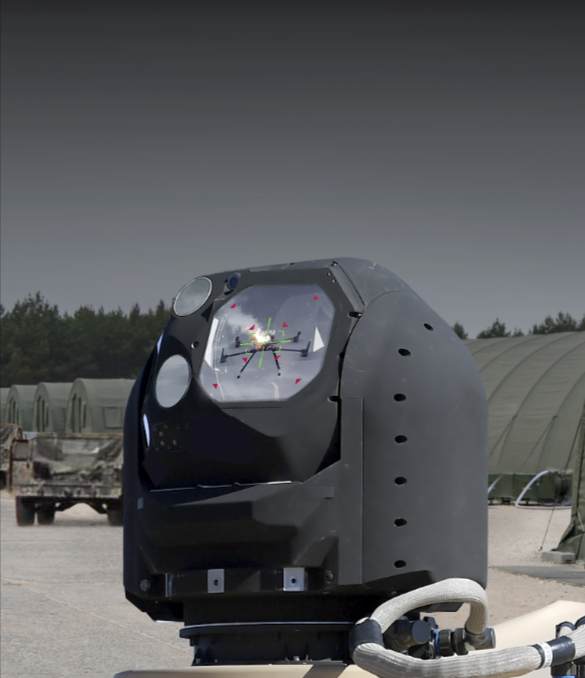 Silent, invisible and precise. This high-energy laser weapon enables detection of threats, tracking during maneuvers, and positive visual identification to defeat a wide range of threats, including drones, rockets, artillery and mortars.

Martin: There’s one obvious difference, and that’s the different power levels. The Air Force system — a counter-UAS, High Energy Laser Weapon System, or HELWS — is a lower-power system up to 15 kilowatts. We’ve delivered four of those systems to the Air Force that are now deployed in OCONUS locations.

The systems are different from the Army systems and were chosen at that power level for a reason. They’re used for base air defense, not for a maneuver short-range air defense function. They’re positioned around the base to do counter-UAS and air defense, and are fully integrated with the base C2 and base defense operations center.

I actually had the privilege to deploy to one of those bases and experience firsthand the extremes of the environment there. We’ve established what I don’t think anyone else has done — multiple systems operating over many thousands of hours with a reliability that proves these systems can run for five, six months straight, 24/7 in that environment before they need regular maintenance actions on them. In the high-energy laser world, that kind of precedent hasn’t been set until these last couple years.

Breaking Defense: What’s the key to providing the military with truly operational systems?

Martin: It starts with being able to produce them. What the Army and Air Force need is a company that can build 10, 20, 30 or more of these weapons in one year. We’ve invested a lot in McKinney so we can produce these systems, and we’re building them for delivery today.

They’re ruggedized for the environment and they’re transportable on military platforms. That’s critically important. They’re designed to sit on C-130s, C-17s, and on most standard pallets, be operated by soldiers 24/7 in extreme environments, and also be supportable by our global, field support network. Those are what you need to deploy a system. You can’t just have a system that you take to a test range for a week and then go back home.

It’s critically valuable that we’ve gained the experience of deploying laser weapons systems overseas and have accumulated approximately 25,000 hours with impressive reliability. We’ve got a lot of systems doing a lot of work and about 400 successful engagements at this point in time.

Because of that experience and soldier feedback, these systems are ready now. We’ve got the factory to produce them, and we’ve demonstrated their effectiveness against the threats. We’ve also trained the soldiers operating these systems, who we call laser gunners, and proven that they can use these systems effectively.

Previous post Q-Scout aims for smartphone security without the intrusiveness

Next post How the metaverse will change digital marketing